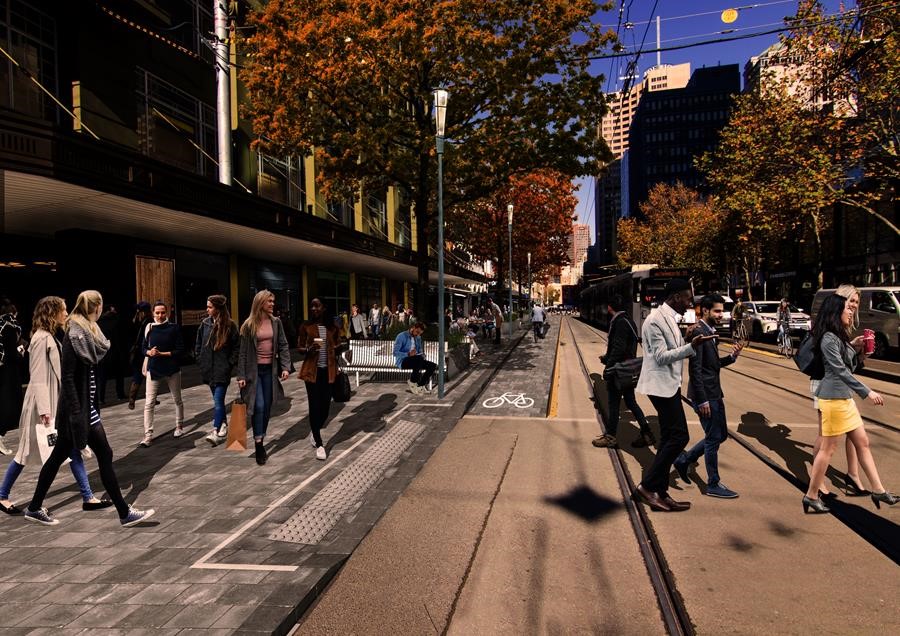 Elizabeth Street would become a safer, greener and more people friendly gateway to Melbourne’s retail and commercial heart under a proposal to be considered by City of Melbourne Councillors on Tuesday.

“As the gateway to Melbourne’s retail and commercial heart, Elizabeth Street plays a key role in how visitors, residents and workers enjoy our city,” the Acting Lord Mayor said.

“We want people to feel more welcome so that when they cross the road from Flinders Street Station they can easily walk down wider bluestone paved footpaths, pop into one of the many retail outlets, take a seat on new street furniture and enjoy alfresco dining.”

The City of Melbourne’s recently released draft Budget included $2.1 million for streetscape improvement works on the southern end of Elizabeth Street from Flinders Street to Little Collins Street. This plan has already been endorsed by Council and works are expected to begin in early 2020.

The opportunities plan to be considered by Councillors on Tuesday focuses on the northern end from Little Collins Street to La Trobe Street. Delivery of these further stages will be subject to both funding and coordination with other major projects in the area.

“If endorsed, the project works will be phased over the next six years, as we work closely with key stakeholders and the Victorian Government to coordinate and communicate changes to the city while delivering world-class places for people,” the Acting Lord Mayor said.

Under the proposed plan, two city blocks that include tram stops would be pedestrianised and closed to vehicular traffic (between La Trobe and Little Lonsdale streets and between Little Bourke and Bourke streets). The footpaths on both sides of the street would be widened to boost safety and accessibility for people using busy city tram stops.

In blocks without tram stops, a large portion of the western side of the street would remain open for private vehicles, maintaining local access, business servicing and delivery requirements.

“The tram stops and transit interchanges at Flinders Street and Melbourne Central are some of the most congested parts in the city. We’re proposing to widen the footpaths to make it safer and easier to access trams,” the Acting Lord Mayor said.

“We know that pedestrian flow is vital to our city economy. In fact, studies show that a 10 per cent increase in walking connectivity in the Hoddle Grid is worth $2.1 billion in economic uplift.”

Dedicated bike lanes will be introduced to improve safety and connectivity and encourage more people to visit businesses on Elizabeth Street.

Transport Portfolio Chair Cr Nicolas Frances Gilley said traffic modelling showed the changes would have minimal impact on the road network because few cars use Elizabeth Street as a through-route.

“Elizabeth Street today carries fewer cars than many residential streets. Pedestrians and people on trams make up 90 per cent of street users but have the least amount of space,” Cr Frances Gilley said.

“In the afternoon peak hour there are on average 3,580 people walking south along Elizabeth Street at La Trobe Street, but only about 261 cars make the same trip. That is 14 times more pedestrians than people travelling by vehicle, and yet cars get allocated more space.

“The proposed realignment would allow trams to operate more efficiently and improve access to shops and retail stores. It would also create more welcoming spaces for people to enjoy which would be a vast improvement on the lack of trees and street furniture currently along Elizabeth Street.”

Aligned with the Draft Transport Strategy 2030, the number of on-street disability and loading parking spaces would be retained in alternate locations on Elizabeth Street, ensuring accessibility for businesses and those who need to travel to the city by car.

The Elizabeth Street Strategic Opportunities Plan will be considered by the Future Melbourne Committee on Tuesday 21 May, 2019. If endorsed, the City of Melbourne will commence further engagement with stakeholders on detailed streetscape designs.